The Home of WildFly eBooks

ItBuzzPress is a new publisher of professional, high quality books about WildFly and Jakarta EE Technology. Our goal is to deliver the latest buzz in technology in easy steps, with a non academic language, enabling the most up-to-date information to be at your fingertips.

Do you want to learn Spring Boot ? check masterspringboot.com a growing collection of Spring Boot tutorials !

This chapter discusses about what JAX-WS is and how to get started with developing services using it. The focus of the book will mainly be on JBossWS a Web Service framework developed as part of WildFly (formerly known as JBoss Application Server), that implements the JAX-WS specification (JSR 224, Java API for XML-based Web Services 2.0). Most of what will be explained, especially in this chapter, still applies to any JAX-WS implementation, though.

END_OF_DOCUMENT_TOKEN_TO_BE_REPLACED

This article discusses about the most common issues when using Maven from a Java EE perspecitve and how to solve them.

END_OF_DOCUMENT_TOKEN_TO_BE_REPLACED 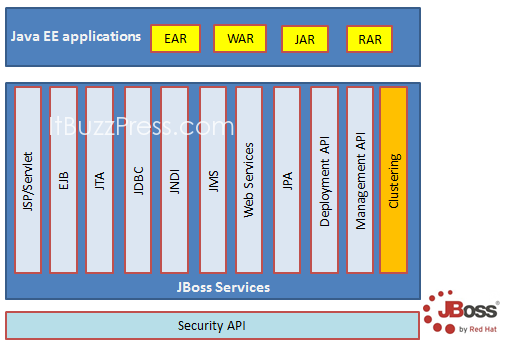 END_OF_DOCUMENT_TOKEN_TO_BE_REPLACED

What is an application server ?

Altough the term application server is not bound to a particular technology it is commonly related to Oracle’s Java Enterprise computing platform.

The application server represents a typical component that is part of a three tier architecture where presentation, application processing, and data management functions are logically separated.

As a matter of fact, one of the main advantages of using application servers are:

Service Components (like EJBs) that can be used to provide a standard way to implement the back-end procedures that are typically found in enterprise applications. Such components are intended to handle such common concerns as persistence, transactional integrity, and security in a standard way, leaving programmers free to concentrate on the particular problem at hand.

Here’s a typical stack of services provided by the application server:

How the application server provides its services
Most application server services are provided by means of a Naming Directory service also known as JNDI that provides a mechanism to bind an object to a name and a directory-lookup interface that allows general queries. 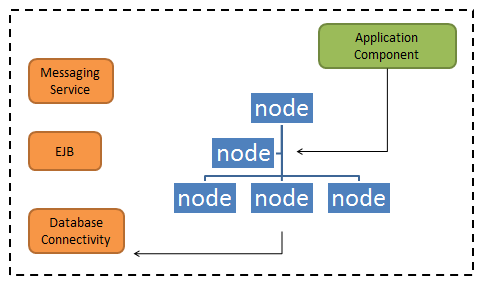 Apache Geronimo is another open source application server developed by the Apache Software Foundation and distributed under the Apache license. The latest release of Apache Geronimo 3 is compatible with Java EE 6.0.

This website uses cookies to improve your experience while you navigate through the website. Out of these, the cookies that are categorized as necessary are stored on your browser as they are essential for the working of basic functionalities of the website. We also use third-party cookies that help us analyze and understand how you use this website. These cookies will be stored in your browser only with your consent. You also have the option to opt-out of these cookies. But opting out of some of these cookies may affect your browsing experience.
Necessary Always Enabled

Any cookies that may not be particularly necessary for the website to function and is used specifically to collect user personal data via analytics, ads, other embedded contents are termed as non-necessary cookies. It is mandatory to procure user consent prior to running these cookies on your website.